Rapido 60  is an ocean cruising trimaran built for performance and comfort.

The first Rapido boat was launched in August 2016. Designed by Morrelli & Melvin and constructed by the former Corsair Marine team, The Rapido 60 offers volume, comfort and speed.

The Rapido 60 was conceived, designed and constructed as an owner operated powerful ocean cruising trimaran providing unparalleled living and storage space with safety, stability and comfort as a top priority.

The concept for the project came from Paul Koch who has drawn, built and navigated on trimarans for 25 years. He wanted a cruising boat with space but without compromise in terms of performances and comfort.

The result is Rapido 60 an unsinkable trimaran easy to sail and that could achieve a speed of 25 knots.

C-PLY™ was chosen for lightness, ease of use and superior finished surface with resulting weight and cost saving.

The Rapido 60 weighs around half the weight of 60 feet performing catamaran with an equivalent surface. 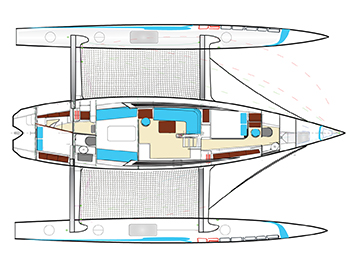